The Gentrification of Canal Street – The New York Times 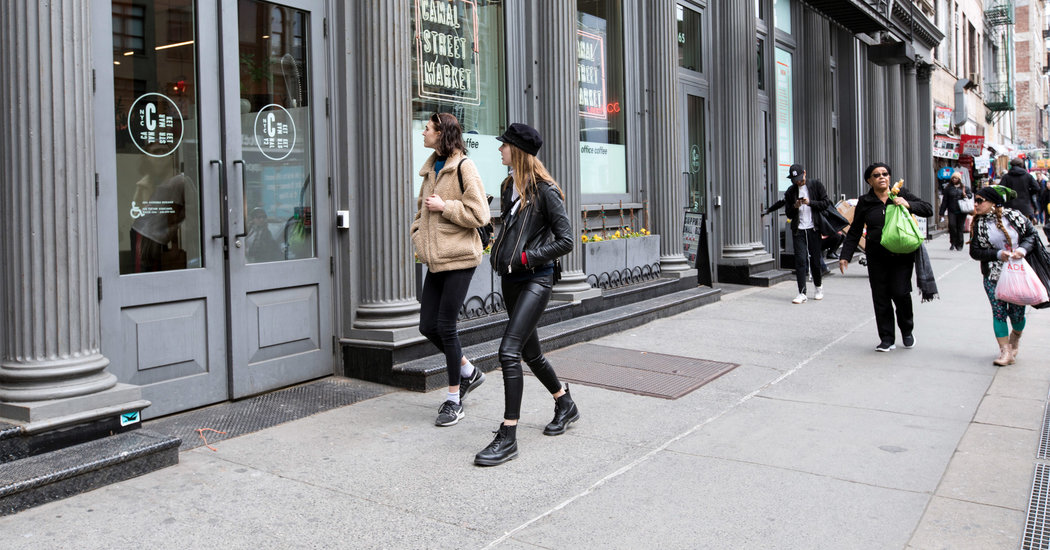 Think Canal Street and the following sights and sounds likely spring to mind: shrink-wrapped counterfeit purses displayed on a blanket (ready to be rolled and stowed in a flash); furtive whispers of “Bag?” “Watch?”; and everywhere, tourists.

Now, clear some space in that mental image and insert a high-end luxury goods store and a hip jewelry boutique. Replace some of the tourists with Brooklyn hipsters (who also wear fanny packs — but ironically), and there you have it: If Canal Street’s newest neighbors are any indication, this is a picture of its future.

“I think people were afraid of Canal Street for so long, and now they’re recognizing there are just so many advantages to the area,” Beth Bugdaycay said. Ms. Bugdaycay and her husband, Murat, are the founders of the fine jewelry label Foundrae, one of the latest shops to open around Canal.

The advantages Ms. Bugdaycay speaks of are pretty obvious and were the reasons for Canal Street’s successes over the generations. The street is accessible by nearly every subway line, is bordered by two of the city’s wealthiest neighborhoods, and has the same cast-iron architecture that made SoHo famous. As Canal Street is consumed by the two, new arrivals are seeing it for the first time.

“I think we’re just beginning to see the neighborhood come alive,” she said.

In March, Foundrae unveiled its shop on Lispenard, a two-block street that runs into Canal, joining the ranks of retail pioneers including R.W. Guild, a luxury home goods store at the corner of Canal and Mercer Streets, and Canal Street Market, at 265 Canal.

Now, in addition to browsing those ubiquitous “I Love New York” T-shirts and curious plastic frogs sentenced to swim for eternity in their little tubs, Canal Street shoppers can peruse the $10,000 gold and diamond pendant necklaces at Foundrae, or pop into Canal Street Market for a $17 lobster roll at Luke’s and check out various indie wares (a ceramic banana from Rebu, say, or a hand-embroidered work wear shirt from Peels).

At R.W. Guild they can munch on a croissant while weighing the merits of a $48 candle or custom-made and antique housewares that may well cost double their rent.

“I had to wonder, was it right to open on Canal — because the Guild is sort of a high-end place — or was it nuts?” said Robin Standefer, who, with Stephen Alesch, founded the design firm Roman and Williams, which opened R.W. Guild in December. “But as a third-generation New Yorker, one of the things I love about this city is that it’s an incredible place of inspiration and aspiration, the high and low all in one place.”

Though R.W. Guild’s official address is 53 Howard Street, Ms. Standefer and Mr. Alesch didn’t want to “cut our face off from Canal,” as she put it. “We wanted to be part of a renaissance.”

Not everyone was sold on the idea, she recalled. “People said: ‘You’re going to let in all these people just buying a cookie? You’re going to keep a door on Canal?’ I’m like, ‘Yes, absolutely.’ The Guild is a high-end place, but I am very egalitarian about this: Everybody is welcome. Stephen and I are really devoted to that.”

As most of these stories go, the neighborhood’s refresh can be traced back to the artists and fashion people who set down roots over the last decade.

“Around 2010, we suddenly saw this influx of awesome, creative new tenants on the commercial floors,” said Philip Chong, the founder of Canal Street Market, who was working in real estate development for HRCE, a company that owns a number of buildings in the area, including the cavernous, six-story one that now houses Canal Street Market.

The newcomers included Office Magazine, an architecture firm, and, Mr. Chong said, “a lot of stylists,” including Mel Ottenberg, who, at the time, was making a name for himself as Rihanna’s go-to. Alexander Wang, Acne and the photographer and illustrator Garance Dore also set up offices in the area. “I saw all these creative and fashion types coming in, in droves,” Mr. Chong said.

Those droves needed to eat. “The idea for Canal Street Market came about because we were thinking about what the neighborhood really needed and what we saw was a huge demand for exciting, new food concepts,” said Mr. Chong, who spent a lot of his childhood in the area around Canal. He wanted to do something that would honor the street’s past, its connection to the iconic markets in Chinatown, as well as appeal to its newcomers.

The idea of a food hall, with a diverse mix of cuisines alongside a rotating roster of retail vendors, emerged. Today, Canal Street Market has 11 food stalls, including an outpost of the famous Chinatown spot Nom Wah Tea Parlor, and around 26 retail vendors, which often change on a monthly basis.

The market opened in December 2016. “The streets definitely seem a lot more bustling during the day,” said Simon Chung, the market’s director of partnership, who formerly served as brand development manager at Opening Ceremony. Of course, the biggest change isn’t the size of the crowd but who is in it. “There’s a lot more locals coming through,” Mr. Chung said.

When Exposure America, a communications agency whose clients include Adidas, Sonos and Dr. Martens, moved into an office a block south of Canal Street on Broadway, it also saw an opportunity. The company turned the ground floor of the building into an event space, which has since been taken over by Dotan Negrin, a musician by trade, and rebranded as 393 NYC. The space has been host to a number of pop-ups, including for Malin & Goetz and Herschel Supply Co. and for an exhibition of work by the artist Jerkface.

“I think this area is turning into another arts district,” Mr. Negrin said. “There are so many artists in the neighborhood, and a lot of new galleries, and theaters opening up soon. My hope is that it’ll become a place where tourists and locals can come and see something cool, whether that’s at a gallery or taking in jazz at the Roxy Hotel.”

Mr. Negrin may get his wish. Later this year, the blue-chip Los Angeles art gallery Regen Projects is scheduled to open its first New York outpost in a 5,300-square-foot space at 60 Lispenard Street, half a block from 393 Broadway.

If downtown New York — or Manhattan in general — seems to be submerged in a sea of gentrification, Canal Street has been that rare sandbar. The waves of gentrification have never overwhelmed it. And it’s this relative resistance that has attracted some newcomers.

“Personally, I love the grittiness of it,” said Ms. Standefer, who likened Canal Street to the area around NoMad, where she and Mr. Alesch designed the Ace Hotel. “Both have this thriving, high-low energy.”

Jonathan Schley, the vice president of Global High Street Retail at CBRE, a commercial real estate services and investment firm, agreed that for some brands, the edginess of Canal Street may be a lure. But Mr. Schley said that the neighborhood still faces a number of challenges, including a lack of charm not helped by the street’s wide girth, unpleasant car traffic and tourist-clotted sidewalks.

Some stores, like R.W. Guild are circumventing this issue by keeping entrances on Howard Street. Foundrae avoided it by popping up on a tributary street. “That’s sort of the best of both worlds because you’re accessible to Canal, but also a little bit out of the melee,” Mr. Schley said. He singled out Lispenard Street, and the blocks between Mercer and Wooster as the most promising in the area to be developed.

“Canal rents are at a minimum 10 percent below the lowest SoHo asking rents,” Mr. Schley said, adding that at the very top end of SoHo — on Prince Street, say — rents can be as much as 75 percent higher than on Canal.

Fifty years ago, Canal Street was a mecca of art and industrial supplies. Some 150 years ago, it was a thriving retail center; 200 years ago, it was marshland. Its next iteration could well be the city’s cool new shopping destination, but, if that’s the case, pioneers like Ms. Standefer hope it won’t erase the area’s local culture.

“I think there’s room for some gentrification, but I hope it’s never going to be a complete redo,” she said. “I think Canal Street has just enough texture and character to always have a foot in both worlds.”

Perhaps one day a luxury brand will set up shop right next to those hawkers selling its counterfeit. Wouldn’t that be the most New York ending to the story?

A version of this article appears in print on , on Page D4 of the New York edition with the headline: Canal Street Cleans Up Nicely. Order Reprints | Today’s Paper | Subscribe